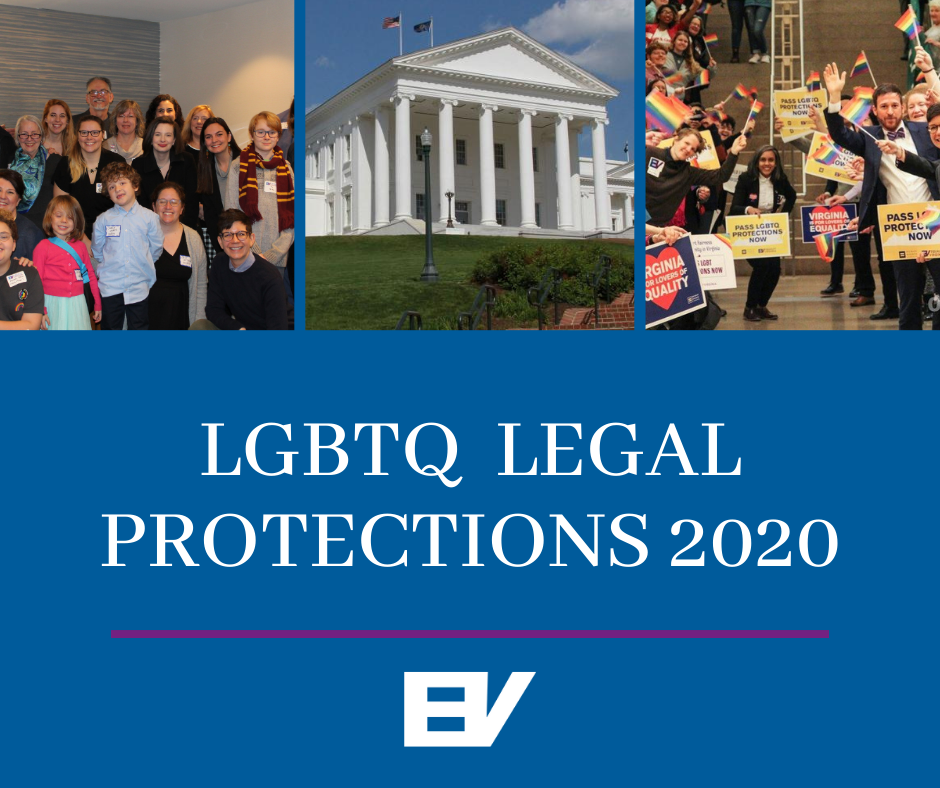 In 2020, Virginia saw historic and life-changing legislation for the LGBTQ community pass out of the General Assembly! Among these achievements, Virginia is now the first state in the South to protect LGBTQ people from discrimination in their daily lives. This is possible thanks to three decades of work by countless advocates like you, as well as  by Equality Virginia, local and national community partners, and pro-equality legislators. We move forward with a changed legal landscape where LGBTQ Virginians can proudly live, love, learn, and work in a more inclusive Commonwealth.

Make sure to read up on these new laws that protect LGBTQ Virginians in countless areas of daily life, which went into effect on July 1, 2020.

The Virginia Values Act, sponsored by Senator Adam Ebbin and Delegate Mark Sickles, protects against discrimination in employment, housing, public spaces, and credit for LGBTQ people, women, people of color, veterans, unmarried and divorced people, seniors, and people of faith. This historic legal victory makes Virginia the first state in the South and the 21st state in the country to protect LGBTQ people from discrimination!

Thank you to Delegate Delores McQuinn, Senator Jennifer Boysko, and Senator Jennifer McClellan who all patroned individual nondiscrimination bills, and became chief co-patrons of the Virginia Values Act. Thank you also to the countless advocates, faith leaders, business supporters, and partner organizations in the Virginia Values Coalition who worked tirelessly to ensure LGBTQ Virginians are protected from discrimination in every area of their daily lives. You can learn more about the law and how it protects you and your community by reading our Frequently Asked Questions Guide.

Delegate Mark Levine’s House Bill (HB) 1049 adds non-discrimination protections for sexual orientation and gender identity into 70 different places in Virginia’s code, covering many areas of law such as public contracts, auto insurance, apprenticeship programs, and so much more. These LGBTQ protections were added to existing non-discrimination laws, so Virginians can follow the normal complaint or reporting process for the covered areas.

Senator Jennifer Boysko’s Senate Bill (SB) 161 and Delegate Marcus Simon’s HB 145 are companion bills that require public schools to provide an equal learning environment to transgender and non-binary students. The Virginia Department of Education (VDOE) is required to craft model policies for local school boards by December 31, 2020. Each school board is then required by law to adopt policies consistent with, or more comprehensive than, the VDOE’s model policies by the beginning of the 2021-2022 school year. You can learn more about advocating for trans and non-binary students by reading our Frequently Asked Questions Guide.

Senator Scott Surovell’s SB 245 and Delegate Patrick Hope’s HB 386 ban the practice of conversion therapy on minors by licensed professionals. Anyone who is licensed by the Virginia Department of Health Professions that practices conversion therapy can face disciplinary action. The law also bans the use of state funds for conducting conversion therapy. You can learn more about the law and how it protects LGBTQ youth by reading our Frequently Asked Questions Guide.

Senator Scott Surovell’s SB 246 allows Virginians to select a non-binary gender marker option on DMV licenses and IDs. It also eliminates the requirement to have any special forms or letters from a healthcare provider in order to update one’s gender marker. This means Virginians will now be able to select for themselves ‘male,’ ‘female,’ or ‘non-binary’ on their state license or ID.

This change will allow transgender and non-binary Virginians to easily update their state ID with an accurate gender marker so they can live more safely and authentically. You can learn more about the law and how to update the gender marker on your DMV license or ID by reading our Frequently Asked Questions Guide.

Senator Jennifer Boysko’s SB 657 and Delegate Marcus Simon’s HB 1041 modernize the process of obtaining a birth certificate that matches one’s identity. The legislation eliminates the requirement for a court order or proof of medical procedure in order to update one’s gender marker on a Virginia birth certificate. It will also allow for a new birth certificate to be issued, rather than merely an amended one that shows old information.

Virginians still need to have a form completed by a health care provider who states they have undergone clinically appropriate treatment for gender transition. You can learn more about the law and how to update the gender marker on your Virginia birth certificate by reading our Frequently Asked Questions Guide.

Delegate Danica Roem’s HB 1429 protects transgender and non-binary people from discrimination in state-regulated health insurance plans, which is about one in four health plans in Virginia. This means that the health insurance plan must cover any medically necessary treatment for a transgender person that it already covers for a cisgender person. Additionally, health insurance companies cannot deny you care simply because the treatment you need is not generally associated with your gender identity, the sex you were assigned at birth, or the gender marker listed with your health care provider or insurance company. You can learn more about the law and how it protects trans and non-binary Virginians’ access to healthcare by reading our Frequently Asked Questions Guide.

Voting without a Photo ID

Delegate Joseph Lindsey’s HB 19 will allow voters to cast a ballot without showing an ID containing a photo. This important update will increase access to the polls for those who have had difficulty accessing a photo ID. This legislation is also particularly important to transgender voters, who have sometimes had difficulty casting a ballot due to their appearance not matching the photo on their ID. Instead voters can prove their identity with one of the following:

Click here to find out more information about voting.

Delegate Richard Sullivan’s HB 276 and Delegate Kenneth Plum’s HB 618 update Virginia’s hate crimes law to protect LGBTQ people and track data on hate crimes. Under this update, women and disabled people are also protected. The bill also eliminates the mandatory minimum terms of confinement for hate crimes. You can learn more about the law and how it protects you and your community by reading our Frequently Asked Questions Guide.

Delegate Danica Roem’s HB 696 allows cities and counties to pass their own non-discrimination ordinances. This was previously not possible since, under Virginia law, only powers expressly given to localities by the General Assembly can be exercised by cities and counties.

Senator Adam Ebbin’s SB 17 and Delegate Nancy Guy’s HB 1490 repealed the ban on same-sex marriages and unions in Virginia’s legal code. This legislative update sends a powerful message that the Commonwealth values all families, including LGBTQ couples and families. Virginia still has an unenforceable amendment in its state constitution prohibiting same-sex marriages and unions, which was ruled unconstitutional by the U.S. Supreme Court.